National Register of Historic Places – Historical Sites in the US 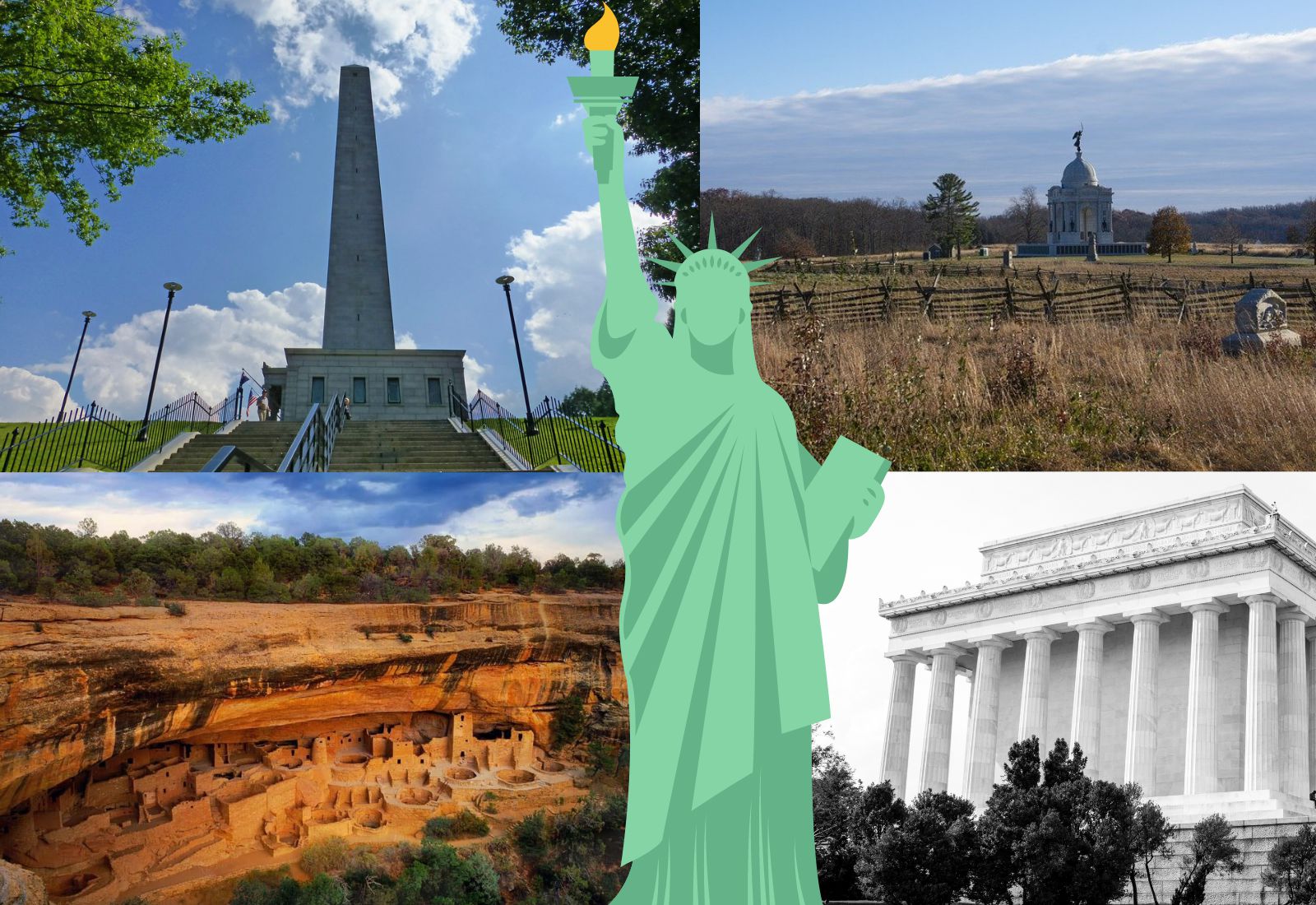 History has its own value that can’t be denied and attracts millions. History lovers prefer to go to historic places to know the reasons behind their importance. People give more value to antiques, momentous and celebrated places that keep historic events, personalities, and acts at their core.

The United States holds most of the world’s important historical places. It has a rich history that is hosting around 90 of such places around the globe that keeps it in the list of the top historical countries. It is home to many of the historical and most visited cities, cultural places, museums, forts, monuments, landmarks, and islands. Moreover, visiting these sites gives you the feeling of the past; the people, their way of living, acts, and hardships they have gone through, and their architecture. In addition, all such historical buildings and architecture were man-made without any sense of technology.

Besides, many of such places are the signs of glories while others are reflecting on the painful past. Due to the rich history of such places, it is attracting more people annually. Furthermore, if you are planning to visit historical sites, it gets difficult to cover up all such places in one visit while having limited time. Here, I will narrow down your thoughts by providing a list of the places that have great importance regarding history. I will provide you with; date, time, events, and other significant and related reasons that made it so important.

Following is the list of historical places that are popular traveling destinations in the US. These are the places that have real stories. Also, such places are the need of the time to visit for the sack of information that lies in them and to be well aware of the past.

The Alcatraz Island was the habitat of the seabirds that was first explored by Lieutenant Juan Manuel de Ayala, in 1775. He named it “Isla de Los Alcatraces” (Isle of the Pelicans). It was later sold to the US and became the first lighthouse on the coast of California in 1854. In 1861, it became a resident for the US military and also kept 19 prisoners at that time who resisted against the government. In 1907, it got the status of Pacific Branch of the US military Prison. It also serves as a federal prison for dangerous prisoners.

Moreover, escaping from the prison of Alcatraz Island was rare because of its location. Some have attempted but no information about their survival from the currents of the bay. In 1972, it became part of the Golden Gate National Recreation Area. No efforts have been made to repair the buildings that have suffered decay. In 1970, buildings were burned but the lighthouse survived and others were destroyed. It is now open to the public and is a popular tourist destination.

Well, that is the most interesting question that people usually ask. Alcatraz is a national recreation area that opened in 1973. Yes, you can stay for a night at Alcatraz but not more than 600 people and spots are given via lottery.

The difference between the day and the night tour is a day you will go straight to the island by yourself. While at night, you will have information that will tell you about different spots and hidden places and such spots that were used by the prisoners to escape. So, the night tour has an information behind-the-scenes tour.

Official Name:   The Statue of Liberty Enlightening the World

The eye-catching Statue of Liberty is the everlasting friendship of the two nations that is French and American. It was the joint effort of these nations. The statue was created by a French sculpture Frederic Auguste out of copper and is designed by a famous personality behind Eiffel Tower that is Gustave Eiffel. It was given to America and was placed on a small island of New York, also known as Liberty Island. The name was dedicated by President Grover Cleveland in 1886.

The Statue of liberty color is blue-green that is the symbol of freedom and democracy and became the focus of millions of visitors across the globe. It is a robed Roman liberty goddess. She is holding a torch in her right hand that signifies the enlightenment and a tabula ansata, where the date of independence of America has been written. A broken chain at her feet is the sign of the abolition of slavery. The status became an iconic symbol and a trademark that is seen as welcoming to the arriving immigrants.

If you want to visit the statue of liberty, then departing in the morning time will be the best because in the afternoon it gets more congested and will take time. Furthermore, visiting in winter is nice because, in the afternoon, you can also see the sunset.

Yes, you have to reserve tickets in advance. They are only with Statue Cruisers. You have to contact them in advance via telephone or can book online.

The US national memorial is the Lincoln Memorial was built to honor the US 16th President, Abraham Lincoln. Across Washington Monument, lies to the west of the National Mall. The reflecting pool and the greenery around the memorial add charm to its beauty. It is in the style of the ancient Greek Temple. The Lincoln memorial statue’s architect was Henry Bacon and designed and carved by Daniel Chester French and Piccirilli brothers, respectively. It was dedicated in May 1922 and is one of several memorials. It has become one of the major tourist attractions since 1930.

Furthermore, Lincoln Memorial is 190 feet long, 119 feet wide and 100 feet in height having 36 columns of 44 feet each that are made of Colorado marble. Each of the columns represents the states in the Union that were at the time of Lincoln’s death in 1865. The statue is 19 feet tall and made of Georgia white marble. The Lincoln statue has the inscription of two of the well-known speeches of Lincoln are “The Gettysburg Address” and the second “Inaugural Address”. Also, there are other famous speeches inscribed including “I Have a Dream” by Martin Luther King.

Absolutely yes! Lincoln Memorial is the safest place during the day and also at night. Administer and police patrols day and night are on duty to answer any question. You can visit the memorial any time and is open 24hrs.

The Lincoln Memorial is totally free of cost. You can also visit the official page of the Memorial Parks and National mall for more confirmation. Furthermore, you will require a special permit for having a wedding function or having commercial photography.

Mesa Verde National Park is a UNESCO world cultural heritage site and an American National Park. It has protected the Ancestral Puebloan archaeological site. One of the best historical places in Colorado was established by American President Theodore Roosevelt. This has preserved more than 5,000 archeological sites having 600 cliff dwellings and the largest in North America. Mesa Verde is a Spanish word that means “green table”. It is best known for Cliff Palaces.

It started in 7500 BC, Mesa was inhabited by Paleo-Indians. They were influenced by the surrounding area of the Great Basin, the Rio Grande Valley, and the San Juan Basin. With time, they developed temporary rock shelters around the area of Mesa. By 750 AD, they developed the Basketmaker culture from the local Archaic population. Those people used to hunt and gather and were farming crops of corn, squash, and beans. At the end of the 12th century, they started constructing cliff dwellings. By 1285, they were facing droughts and environmental disability and moved to the areas in the south of Arizona and New Mexico.

Yes, you can also tour Mesa Verde on your own. You can go at your own speed and can visit those places that you want to see.

Bunker Hill Monument is a historical landmark. In 1794, King Solomon erected an 18-foot wooden pillar in honor of Patriot Dr. Joseph Warren. He was killed during the final assault. The Bunker Hill Monument was constructed after 29-years as a permanent memorial. The association purchased 30 acres of land for the monument.

Moreover, due to a shortage of funds, the work was halted several times. Later, the association sold 10 acres of the land for housing and to complete the work. Its construction was completed in 1843 and it is 221 feet tall. The bunker hill monument steps are 294 to reach the top. The monument became part of the Boston National Historical Park and was designated a National Historic Landmark in 1961.

He was a political leader and an active protester against the Stamp Act of 1765. He also headed a committee to protest against the Boston Massacre in 1770.

The Gettysburg Battlefield is the place where the war has been fought between Union and Confederate forces during the American Civil War. The battle resulted in a large number of casualties as compared to the whole civil war. It is remembered as the turning point because of the Union victory and the Siege of Vicksburg. Gen. Robert E of the Confederate army was defeated by Maj. Gen. George Meade of the Union. Lee led his army to the north in Shenandoah for the second invasion after victory in Virginia in May 1863 with high spirits. He hoped to influence the Northern politicians and penetrate far in Harrisburg, Pennsylvania, and Philadelphia.

The armies collided on July 1, 1863. At the start of the battle, the Unions were driven back but later they took the defensive role and besides the Confederate fierce attack, they managed well to hold their positions and defended despite significant losses. On the third day, the Union rifle and artillery fire performed well at the great loss of the Confederate army and retreated back to Virginia. The casualties from both sides were about 47,000 to 51,000 in three days and were costly in US history. On November 19, President Lincoln dedicated Gettysburg National Cemetery to the fallen soldiers to honor them.

It depends on the interest level of the visitor. Normally, it takes 2-3 days to explore all of the Battlefield, the town, the shops, the museums, and other attractive areas.

Yes, The Gettysburg Battlefield is open throughout the year even though it was open in pandemic situations. One can visit anytime.

History has its own value and importance. It can’t be neglected at any step of life. To conclude the historical places of the US, I will say that the above-mentioned places are the most visited sites in the US, annually. These are the core and basic places where much of the history of the USA lies. It will take you back to the ancient days and you will feel the time.

Moreover, there is the peak of architecture that shows the intellectual level of people at that time. You will definitely praise them once you visit.