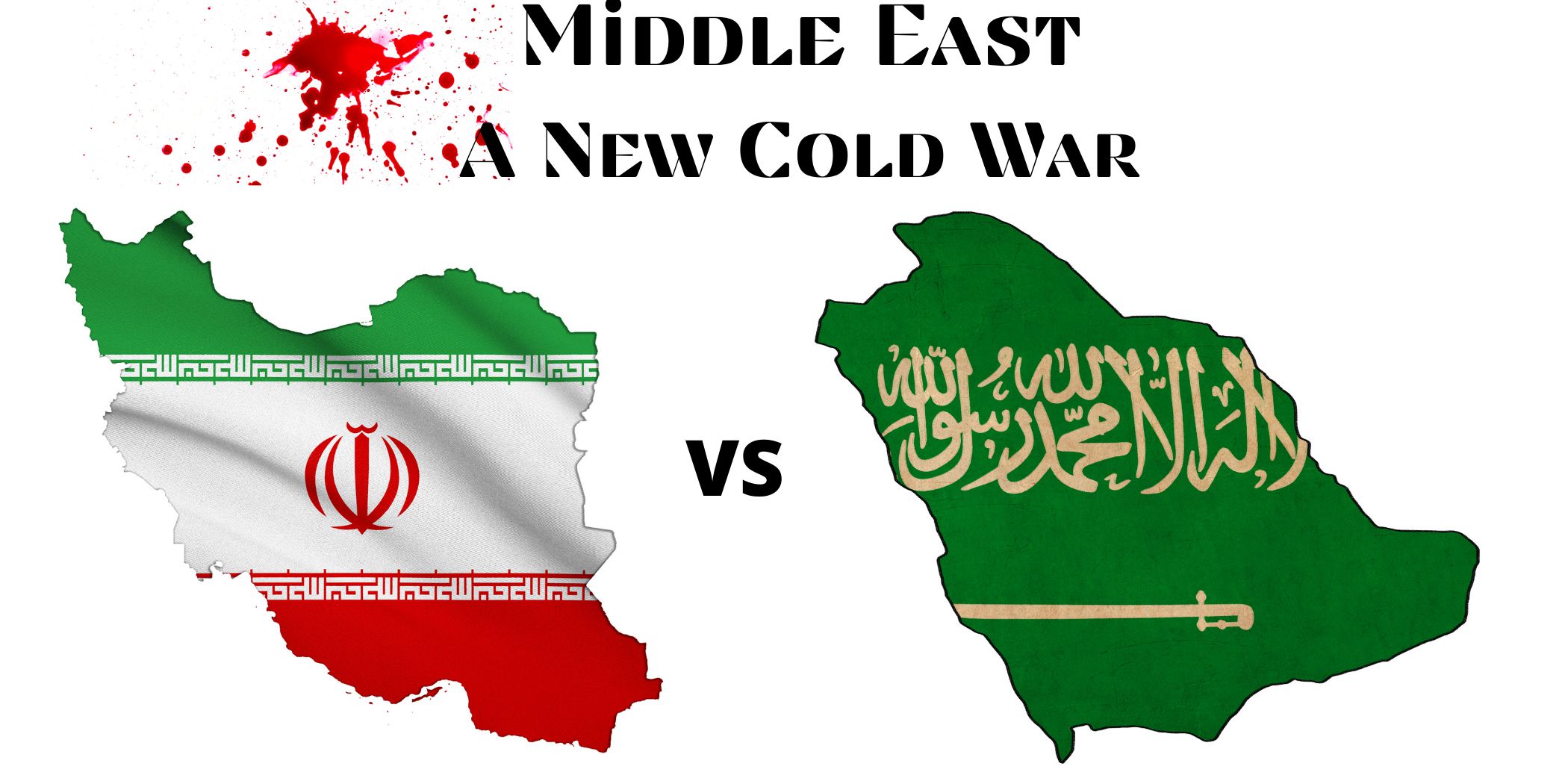 The Middle East is one of the complex regions in the world. Currently, there are failing states and three wars, with major powers taking the opposite sides. Countless armed militias and terrorist groups are spreading violence across borders. The region has seen conflicts after conflicts. But among all the uprisings, civil wars, and insurgencies, two countries always seem to be involved: Saudi Arabia and Iran. They are bitter rivals, and their feud is to understand conflicts in the Middle East.

The Saudis and Iranian have never actually declared war on each other. Instead, they fight indirectly by supporting opposite sides in countries and inciting conflicts. That is called proxy warfare, and it had a devastating effect on the region. A poor country can’t function until the big countries have their nose in their affairs. Both the Saudis and Iranians see the civil war as a big threat. Along with this, it is potentially an enormous opportunity. The Saudi-Iranian rivalry results in the whole Middle East into a battlefield. It is why the rivalry is being called: A Cold War.

The famous cold war of 40-years was fought between the United States and the Soviet Union. They never declared direct war on each other but clashed in proxy wars around the world. Each side supported dictators, rebel groups, and intervened in Civil Wars. Just like the US and the Soviet Union; Saudi Arabia and Iran are two powerful rivals, but instead of fighting for world dominance, they are fighting over the control of the Middle East. To understand the Saudi-Iranian rivalry, let’s go back to the origin of each country.

In the early 1900s, the Arabian Peninsula was a patchwork of tribes under the control of the Ottoman Empire. After World War 1, the empire collapsed, leaving these tribes to fight each other for power. One tribe from the interior, the al-Saud, eventually conquered most of the peninsula. In 1932, they have declared the kingdom of Saudi Arabia. Six years later, massive oil reserves were discovered in Saudi Arabia, and in a short time, the Saudi monarchy was rich. That oil money built roads and cities all around the desert country and it helped ally with the US. On the eastern side of the Persian Gulf, another country was emerging, but having a much harder time. Iran also had massive oil reserves and an even bigger Muslim population. But constant foreign intervention created chaos. Since the 18th century, Iran had been invaded by Russians and British twice.

The real dilemma starts in 1953, when the US secretly staged a coup, removing the prime minister, Muhammad Mosaddegh. In his place, they propped up a monarch, Reza Shah, who was aggressively reforming Iran into a secular westernized country. But he harbored corruption and terrorized the population with his secret police, the Savak. By the 1970s, both Saudi Arabia and Iran had oil-based economies and had governments heavily backed by the US, but the feeling among each population was very different.

Ultimately, the Shah of Iran has no control over his people. The people of Iran felt stifled by Shah’s reformation and by the end of the decade, they fight back and over through the Shah’s regime. Iran’s Islamic revolution started in 1979 and threw the powerful regime. Ayatollah Khomeini overthrows the Shah, and the real tension between Saudi Arabia and Iran begins. Ayatollah Khomeini was a Muslim clergyman, who preached against western-backed secular monarchies. He advocated for a government that is Islamic and led by the clergy. In 1979, he led a revolution to establish just that. It was a massive international event that prompted reactions around the world, especially in Saudi Arabia.

The Iranian revolution terrified the Saudi Government. They were thinking that their people will also arise and will throw our government as Ayatollah Khomeini done with Shah’s regime. There was a religious threat too. Until now, the Saudis were claiming the leaders of the Muslim world as they have control of the Holy places of Muslims; Makah and Medina. But Khomeini claims Iran is the legitimate leader of the Muslim world.

There is another side that the Saudi population is mostly Sunni while that of Iran is Shia. After the revolution, the Saudis start fearing when Iran started exporting its revolution. The CIA report from 1980 said that Iran started helping groups, mostly Shia, and trying to overthrow governments in Iraq, Afghanistan, and Saudi Arabia. This act of Iran terrified the Saudis and they started their alliance with the US and formed GCC (Gulf Cooperation Council) alliance with other Gulf Monarchies. The stage was set for conflict. The rise of Iran as regional powers threatened its neighboring countries.

In September 1980; Iraq invaded Iran under the rule of Dictator Saddam Hussian. He was hoping to stop the Iranian revolution, have some power and annex some of their oil reserves. But they do not go far. When Iran starts winning, the Saudis get panic and come to rescue Iraq. They helped Iraq with money and weapons and made up Iraq to hold back Iran. The Saudi help made Iraq fight till 1988.

Millions of people died in the war. The Iranians blamed Saudis for the war. Iraq becomes the region of proxy war. In 2003, the US invaded Iraq and threw out the Saddam regime. Neither Iran nor Saudi Arabia took any interest because Iraq was acting like a buffer zone for them. The US has no idea what they will do after 2003 and create a security vacuum that drives Iraq into an all-out Civil War. Without the government, armed militias take control of Iraq divided the region into Sunni Shia militias. Many of them were radical Islamists, who saw an opportunity to have power.

These militias were a readymade proxy for Iran and Saudi Arabia, and they both want to avail themselves of the opportunity to gain control. The Saudis started sending money to Sunni militias and Iran started helping Shias. That trend continued until the Arab spring in 2011. This had far more consequences for Iran and Saudi Arabia. Saudi Arabia wants the region to be in peace because they were terrified that their people will be inspired against the autocratic government.

Throughout the Middle East, Iran is supporting Shias and Saudi Arabia is supporting Sunnis. Like in Tunisia, Saudi backed a dictator while Iran stoked protests. In Bahrain, Iran supported the Shia group to overthrow the government while Saudis sent troops to settle down the unrest. Similarly, both got involved in Libya, Lebanon, and Morocco. The escalation goes one step further. The Iran and Saudi Arabia militaries are now on the ground. In Yemen, the Saudi military is on the ground to help the government against the Iranian-backed Houthis group.

The reverse is happening in Syria, Iran is helping the militias, and some of them are extremist groups like Hisbollah, in support of dictator Bashar al-Assad. They are fighting with Sunni groups, who are Saudi proxies. The more civil wars broke in the Middle East, the more Saudis and Iran is becoming involved. Neither Saudi Arabia nor Iran wants to fight. But these civil wars have created circumstances that no one could have predicted. Both the countries know that their national interest is in threat. Different things happen in these civil wars and both blame one another.

Now, the Cold war is going on in other countries. Saudi Arabia is threatening Qatar to cut down ties with Iran. Meanwhile, in Syria and Iraq, the terrorist group ISIS is near to defeat and both Iran and Saudi Arabia are trying to take control of the region. It is a cold war that is becoming unpredictable. As the Middle East continues to destabilize, it is hard to say how far these countries will go.