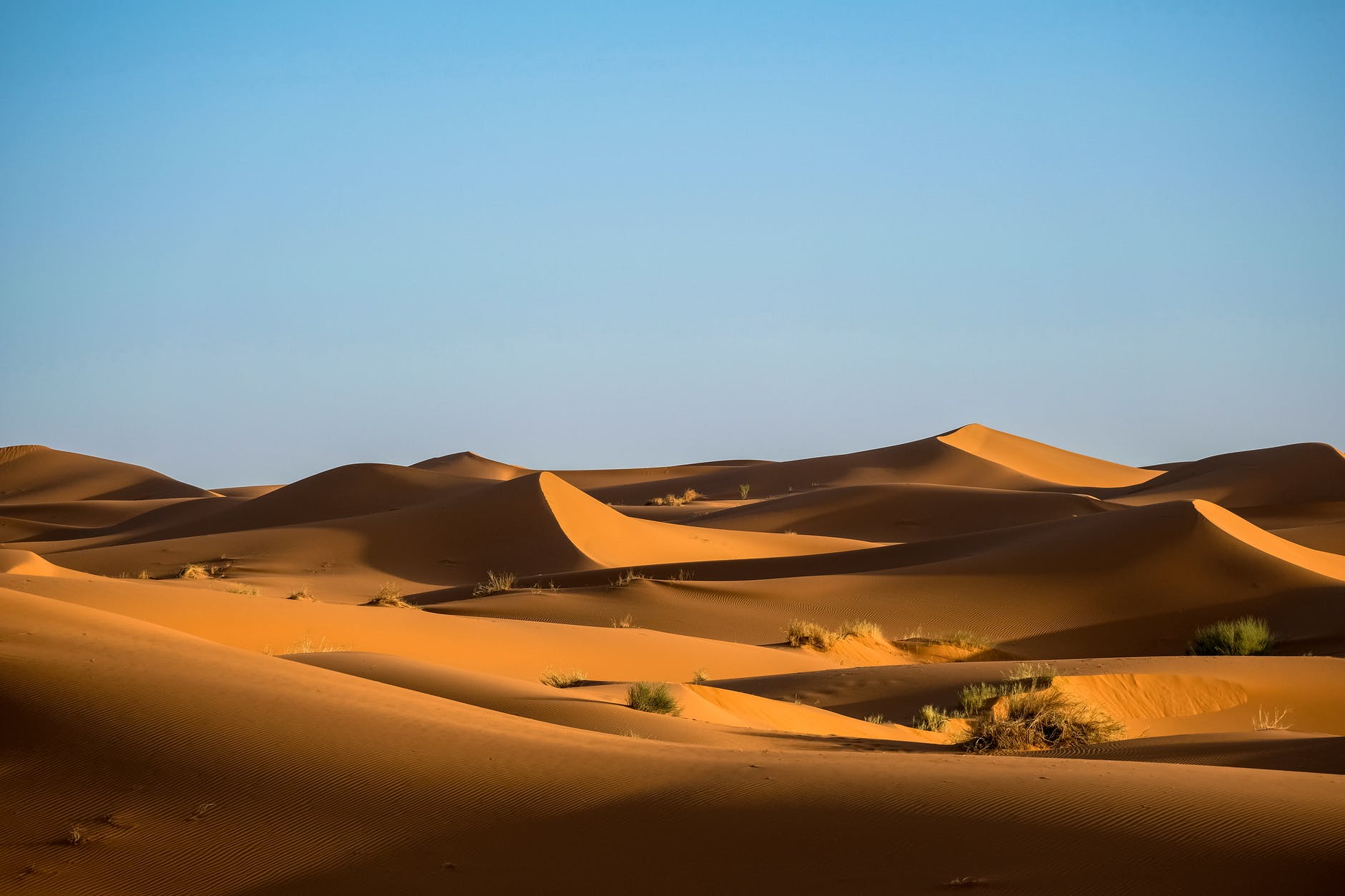 A desert is not a place where there is sand all over but a region that receives a very little amount of precipitation, less than 250mm a year. One-third of the earth’s surface is covered by deserts. They are of different types having four different categories; polar deserts, subtropical deserts, cold winter deserts, and cool coastal deserts.

What is a desert?

Normally, when we listen to the word ‘desert’ a thought comes to our mind that it will be a vast land filled with sand having the hottest temperature and with the scarcity of water. But in reality, such regions are to be called deserts that have precipitation less than 250mm or 10 inches throughout the year. The temperature could be varied; it could be too hot or too cold. The temperature of a desert region is not in favor of living, that is why they are the most deserted places with little signs of life.

Following are the deserts in the world. I have categorized them based on the largest area it has covered and will also mention with them which type of deserts they are.

Antarctica is the biggest desert in the world. It is a polar desert located at the South Pole having the majority of Antarctica. It has such a vast area that it is lonely, greater than the combined size of the Sahara, the Gobi, and the Arabian Desert. The total surface area of the Antarctic Desert is about 5,500,000 square miles.

The temperature over there remains very harsh and cold throughout the year. Mostly, in the past, it was believed that there are no signs of life in the Antarctic desert, but later in the 1970s, a small number of microorganisms were discovered. Moreover, many notable personalities explored the great Antarctic Desert, the first one was Norwegian explorer Roald Amundsen.

Why is Antarctica called a desert?

Besides a lot of water in the form of ice, Antarctica has very little amount of rain annually. Less than 51mm of annual rain adds it to the list of deserts.

What is the largest desert in the world?

icu4biz a contributor on TripAdvisor reviewed that the experience to Antarctica was amazing. He went from South America and said that it was breathtaking. He said that I am short of words to describe my experience.

As we have discussed above, a desert is not meant to be a sandy region. Similarly, the Arctic desert is the 2nd largest desert in the world after the Antarctic desert. It lies on the North Pole, another end of the world. Its total area is about 5,400,000 square miles. Polar deserts have a very cold temperature, an abundance of ice sheets, and a lack of rainfall.

Like the Antarctic, it is also the coldest desert in the world. This pole also has a hostile environment for life. But, still, it is home to many animals like Fox, Wolf, Bear, Owl, and Moose. The first person that explored the North pole and the Arctic Desert was the same who explored the South pole, Roald Amundsen.

Do people live in Arctic Desert

The residents include a number of indigenous groups and more recent arrivals from the southern latitudes. To sum up, about 4 million people are living in the Arctic worldwide, and in most of the countries, these indigenous people make up a minority of the Arctic population.

What type of desert is the Arctic?

The Arctic is one of the coldest deserts because of having very little precipitation (rain or snow) and that is why the snow that does fall doesn’t melt. The whole area is deeply covered by the snow for the maximum duration of the year resulting in a cold breezy condition.

Curious38140081204 a member of TripAdvisor reviewed, “Great tour, and Bob was the best tour guide! Very scenic trip with many stops and opportunities for pictures. Bob was very knowledgeable and encouraged questions and participation from all guests”.

Currently, it also alternates between a savanna grassland and a desert in a period of 20,000 years. This is due to a wobble in the Earth’s axis that affects the North African Monsoon and will probably change the status of Sahara to green in around 15,000 years. Camels are used in the majority for traveling purposes in deserts because of their long survival without water. It is also said to be the largest hot desert in the world.

What is the hottest desert in the world?

Lut desert is the hottest desert in the world located in Iran. The overall temperature there is 70.7°C.

What is the common animal of the Sahara Desert?

Dromedary Camel is the most common animal of the Sahara Desert.

Linda K. on TripAdvisor said that we have greatly enjoyed the company trip to the Sahara Desert. It was a memorable vacation. She said that it was the best time of my life and the sand all over there was an awesome experience.

Different deserts of Australia combined to form an Australian Desert. It is a subtropical desert and the fourth world’s largest desert. The total area of the desert is 2,700,000 square kilometers having 18% of the total area of Australia. It is spread on the western plateau and interior lowlands of the country.

Australia is the driest continent in the world that receives a little rain. There is an interesting point that the rainfall distribution varied in some years. Most of the time they can be called deserts while in another year they can’t be categorized as a desert because the rainfall exceeds the limit.

Where are most of the major deserts of the world located?

Most of the great deserts in the world are located on the African and Australian continents.

How much of Australia is arid desert?

Sonia J reviewed on TripAdvisor in such words that it is a great destination with an amazing park. The great display of fauna and flora of the outback. Moreover, the nocturnal houses and the bird show were awesome.

Another subtropical famous desert. It is the fifth-largest and oldest desert in the world. Its total area is 716,400 square miles that cover most of the Arabian Peninsula. The desert is spread to nine different countries. Interestingly, the southern part of the desert has untouched sand in the whole world which is known as Rub’ al Khali or Empty Quarter in English.

Due to the environmental conditions, it has a small number of species including Arabian Camel, wolf, Sand Gazelle, and Red Fox. However, the desert’s environment is ideal for reptiles such as snakes, geckos, and lizards. It is also the hottest desert in the world.

Which Arab country has no desert?

Jan-Eric wrote a review on TripAdvisor that the trip was awesome. The desert, camel ride, BBQ, and belly dance were wonderful. At night, the stargazing and night sky view was beyond majestic view.

In a nutshell, above are the famous and largest deserts in the world. I have also categorized them based on covering the largest area for the reader’s ease. Moreover, provided with the proper definition of deserts and little other info that will help in understanding better that what is a desert.

In addition, I have mentioned the types of deserts and also wrote the type of the concern desert above mentioned. Lastly, one can use this info for their study material because it is the result of deep research with utmost care. I hope that this article will help you a lot in narrowing your idea about deserts.